(c) embossing is stretching the sheet metal blank into desired shape under a punch and a die.

Although the process is called deep drawing on account of its capability of producing deep parts such as pots, pans, kitchen sinks, automotive fuel tanks, containers of food and beverages, kitchen utensils, the process is used for drawing shallow or moderate depths also. Drawn parts are made when a punch forces a flat sheet metal blank into a die cavity. The important variables included in deep drawing are:

(i) Properties of sheet metal, for example, ductility,

(iii) Clearance between the die and the punch,

(v) Force on blank holder and 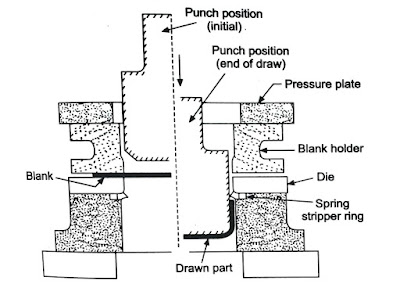 In the drawing operation, blank is placed and located above the die. The blank holder then comes down and holds the edges of the blank. Later, the punch descends to force the blank through the die, thus producing cup-shaped articles. The stripper ring (spring loaded) facilitates the removal of the formed cup from the punch (during its upward or back movement). Large drawn depths in one go should be avoided. Deep drawing should, therefore, be done in stages. The process of approaching the final shape during deep drawing by advancing (or drawing to various depths in steps) and using previous partially drawn part for subsequent drawing is called redrawing.

Multiple action dies are used these days for drawing operations. They perform multistep forming in one operation. In these, the punch and die segments are operated in a sequence which is coordinated with the press stroke.

A compound die for accomplishing both blanking and drawing operations in one go of the press. 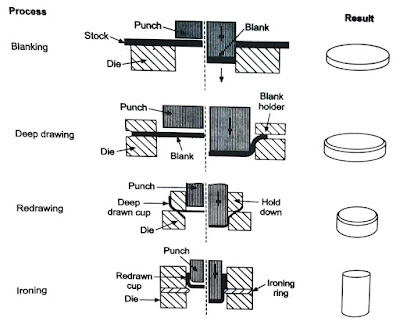 A progressive die system used for blanking, drawing and ironing in successive stages of drawing.

Embossing is the placing of configurations on the surface of a part by means of dies which draw the material into position with very little effect on thickness. The sheet metal blank is stretched to the desired shape under the pressure of a punch and die. Punch operates at a slow speed so as to allow time for proper stretching of the sheet metal. The operation gives a stiffening effect to the embossed article.