Gears are available in a great variety. Only the more common types are described in the following:

1. Spur gear has straight teeth which are cut or cast parallel to the axis of rotation of the gear. Normally, the teeth have involute form. Spur gears are used to transmit power between the two parallel shafts. Out of the two mating gears, the smaller one is called pinion and the bigger one wheel. While the power transmission efficiency of these gears is very high (about 99%), they are noisy in operation.

2. Helical gear has inclined teeth wherein each tooth forms a part of the helix or spiral. Helical gears also transmit power between the two parallel shafts but they are better than spur gears in strength and load carrying capacity and they also operate silently. These may be single or double helical type. The single helical gears generate axial thrust during operation, whereas no axial thrust is generated with double helical gear [or often termed herringbone gears]. Skew or spiral gears are used to connect non-parallel, non-intersecting shafts.

3. Bevel gears are used to connect two shafts at any desired angle to one another (i.e. which intersect and are not parallel). A bevel gear may have straight teeth or spiral teeth (the gear is known as spiral bevel gear). Mitre gears is the name given to a pair of mating bevel gears in which each will have the same number of teeth and their axes will intersect at right angles to each other. 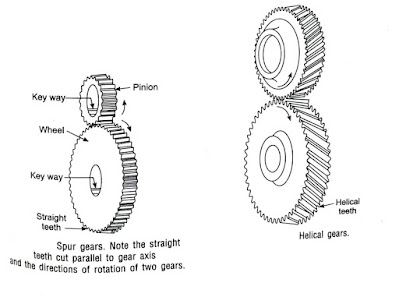 4. Hypoid gears are similar to bevel gears but the axes of the two connected shafts do not intersect. They have curved teeth, are quiet in running and stronger than common bevel gear. These are mainly used in automobile rear axle drives. 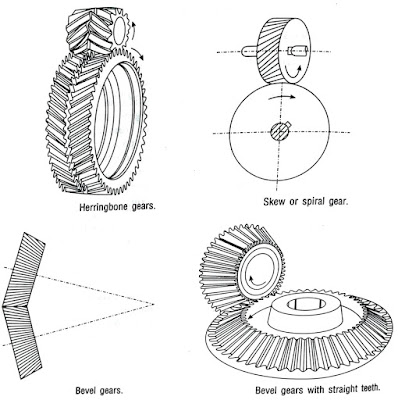 5. Worm and worm wheel combination is used for power transmission between two shafts, the axes of which are non-intersecting and at right angles. The worm drives the worm wheel and is similar to a screw having single or multiple start threads, which form the teeth of the worm. By keeping a small helical angle of the worm gear (or worm wheel) teeth, the drive may be made non-reversible type, i.e. worm is always the driver. Worm and worm wheel combination is used for speed reduction purpose. The speed reduction ratio is the ratio of the number of teeth on the worm wheel to the number of starts of the threads on the worm.

6. Rack and pinion combination forms a device to convert the reciprocating motion of the rack into a rotary motion of the pinion and vice versa. Rack can be defined as a gear of infinite radius.

7. Internal gears carry teeth inside their rim and are used for specific purposes, for example, a ring gear used to rotate a jib crane structure on its base. 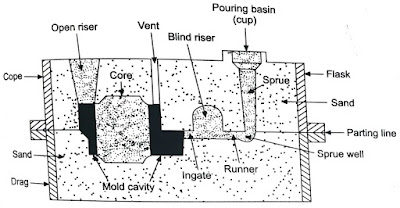