Rolling is carried out in different types of rolling mills. The flow of metal in rolling is continuous and almost entirely in longitudinal direction. The ingots heated to rolling temperature in soaking pits are rolled in blooming mills to convert the ingots into blooms. Grooved rolls are used in blooming mills. Since blooming is the first operation through which all ingots have to pass, the blooming mills are, therefore, called mother mills. In most cases, the primary rolling is done in either a two-high reversing mill or a three-high continuous rolling mills.

Several types of rolling mills with diverse roll arrangements are in use. Although the equipment used for hot and cold rolling are nearly same, there are, however, some differences roll diameter, process parameters, lubricants and cooling systems. Rolling mills have heavy investment on equipment and their running. Rolling speed for cold rolling may range up to 25 metres per second or more in highly automated computerized mills. The following types of hot rolling mills are in common use with industry.

Two-high reversing mills: Two-high rolling mills also called cogging mills, are often used for hot rolling in initial breakdown passes (primary roughing) on cast ingots or continuous castings. These comprise two big rollers (diameter ranging from 0.6 metre to 1.4 metres) arranged one above the other and rotating in opposite directions. 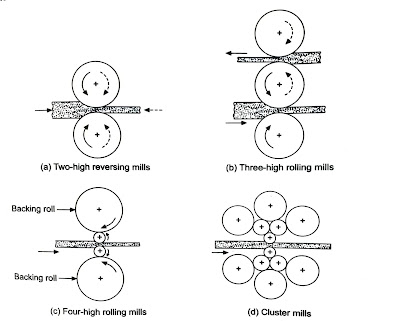 The direction of rotation of the rolls can be reversed. The position of lower roller may be fixed and the upper roller can be raised up or lowered down to adjust the gap between the two rollers to accommodate the slabs of varying thickness during rolling. In operation, when the full length of metal has been passed through the rolls, they are stopped and reversed in direction and the operation of rolling is repeated. The metal ingot is rotated about its long axis by 90° at frequent intervals with the help of manipulators, to have uniform cross-section of rolled metal and also refinement of grains throughout the ingot by bringing all the four sides of the ingot in contact with rolls. Several repeated passes are needed to reduce the ingot into a bloom of smaller size as the mill provides wide range of adjustments for the size of product and the rate of reduction. Various reductions in the cross-sectional area of the metal are obtained by using grooved rolls (both upper and lower) of different size grooves.

Three-high rolling mills: These consist of three rolls mounted one above the other. This arrangement eliminates the need for reversing the rolls as in case of two-high reversing mills. The top and bottom rolls revolve in the same direction whereas the intermediate roll revolves in opposite direction. Less power is needed in these mills but these are not as flexible in taking up large variety of jobs as the two-high reversing mills. In the three-high rolling mills, the direction of movement of the metal is reversed after each pass; the metal being rolled is first raised to the upper roll-gap, rolled and then lowered to the lower roll-gap and rolled (by moving the metal in opposite direction to the first rolling). All these operations are conducted using various types of elevators and manipulators. These mills are very common for rolling structural steels such as 1-beam, channels and angles.

Four-high rolling mills: Four-high rolling mills use small diameter rolls. The replacement of rollers (after being worn out) is less costly than replacing larger diameter rolls. Since small rolls deflect more under roll forces, these are supported by backing rolls. Four high mills are commonly used for both hot and cold rolling of plates and sheets. Slabs from slabbing mills are usually sent to four-high mills for subsequent rolling them into sheets or plates.

Cluster mills (sendzimir or z-mill): A cluster mill consists of two working rolls of smaller diameter which are backed by four or more back-up rolls of larger diameter. The sendzimir mill facility is extremely costly and is mostly used for cold rolling of thin sheets of high-strength metals. Common rolled widths are between 0.66 and 1.5 metres.

Continuous rolling mills (or tandem rolling): A continuous or tandem rolling mill consists of a number of stands of rolling mills arranged one after the other such that the metal strip can be passed continuously during rolling through all of the stands successively, to smaller gages with each pass. As the metal comes out of one set of rolls, it enters the second set of rolls, and then enters the third set of rolls, and so on and until finally it comes out with the reduced section of required shape and size of the final product. The speed of any successive set of rolls greater than the preceding set of rolls to accommodate the increasing length of the workpiece. Each stand consists of a set of rolls with its own housing and controls. The control of gauge and of speed of strip is critical and this is managed using electronic and computerized systems with extensive hydraulic controls. A continuous mill is fast and requires minimum floor area and is a mass production mill giving high rate of production 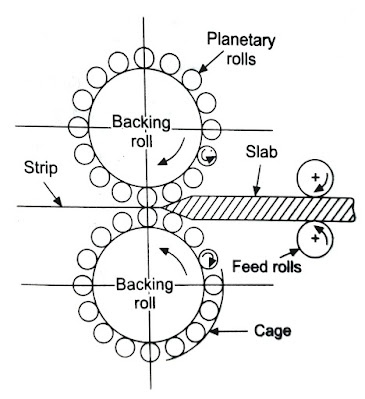 Planetary rolling mill. Note that the small diameter rolls contained in a cage (shown partly) are used for rolling purpose. The chief feature of the planetary mill is that it reduces a hot slab directly to strip in one pass through the mill. 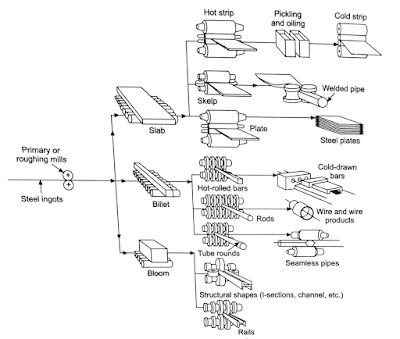