‘Light amplification by stimulated emission of radiation’ is called a laser beam. All lights consist of waves and in common lights, these waves are incoherent and are of varied wave. lengths and frequencies because of which they shoot off in numerous directions. On the other hand, a laser beam is a coherent light, i.e. waves are identical and parallel. Laser produces a coherent monochromatic (one colour) light which is in the form of almost collimated beam. that is focused optically on to a very small spot of less than 0.002 mm diameter. In operation, the work is placed on an aluminium table which is resistant to being cut by the laser beam. The laser head is traversed over the work during cutting. Metal removal in laser machining is due to a combination of melting and evaporation of the metal.

The set-up for laser machining is shown in (Fig.). It consists of the following:

(a) A cylindrical ruby crystal rod which is the main part of the laser system. Ruby is aluminium oxide with 0.05% chromium dispersed through it. The ends of ruby crystal or rod are flat and silvered to form reflecting mirrors. While one end is fully reflective, the other end of the ruby rod is a partially reflecting mirror and has a tiny hole in the centre of the silver layer for the escape (or emerging) of the laser beam. 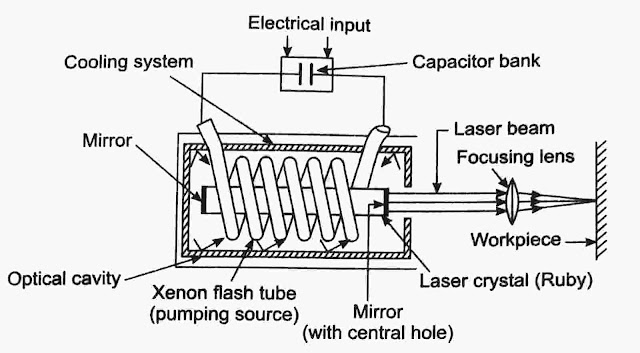 As a result of the ruby crystal being exposed to the intense light flashes, chromium atoms of the crystal at ground energy level absorb this external energy (from light flashes) and get exited and pumped to a higher energy level which being an unstable state: the exited atoms spontaneously begin to drop back to their original state (ground energy level). In doing so, they radiate back the energy absorbed by them and this energy is in the form of a discrete quantity of radiation (photons) in the form of red fluorescent light.

No sooner does the photon emitted by one excited atom hit or bombard another excited atom, the second atom instantaneously gives off photon which is in phase with the colliding photon and this way red light emitted by the first exited atom is amplified because more light exactly like it is produced. The effect is further enhanced because the parallel ends of the ruby rod are mirrored and the red light that is produced reflects back and forth along the length of the ruby crystal.

The chain reaction collisions between fluorescent red light waves and exited chromium atoms become so numerous that finally, the total energy bursts over a threshold and escape from the small hole in the partially reflecting mirror at one end of the ruby crystal, as the laser beam. This narrow laser beam is focused by an optical focusing lens to produce a small intense spot of laser (light) on the workpiece.

Optical energy, as it impacts the workpiece, is converted into heat energy and the temperature attained can melt and vaporize the material to be cut. Because most of the power output of the laser is lost as heat, cooling system is used to carry away the same and for that gas or liquid cooling is used. The ruby rod and flash tube are housed in an optical reflective enclosure which reflects and focuses high intensity radiations from flash tube on to the ruby crystal.

These are given in the following:

(c) liquid laser. The CO, and Nd-YAG lasers are most commonly used in industry being very powerful tools (power output about 1 kW). Both ruby laser and glass laser are pulsed lasers capable of power output of about 100 joules. Liquid lasers used are based on fluids such as nitrobenzene.

Laser beam in short pulses can give power input nearly 10 kW/cm² of beam cross-section and by focusing the beam on a spot of 1/100 of a square mm in size, the beam can be concentrated in short flashes to power density of 100,000 kW/cm², thus providing enough heat to melt and vaporize any known material.

Any material thus can be machined irrespective of its physical and mechanical properties; no tool wear; small heat-affected zone around machined surface; small holes and cuts made with reasonable accuracy. The capital cost is high, skilled labour required, production rate very slow. Laser cannot be used to drill too deep holes and also the holes are not round and straight. 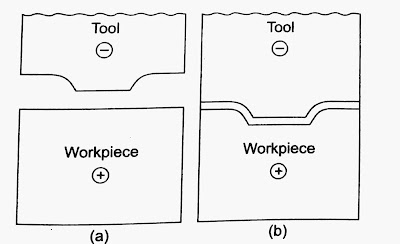