These tests have been used for inspection of metals of all types and thickness ranging from minute electronic components to plates up to half-a-metre thick Cracks, porosity, holes, slag inclusions, lack of fusion and incomplete penetration, etc. are effectively detected. Radiography technique is based on exposing the weldments to short wavelength radiations X-rays (wavelength less than 0.001x 10-8 to 40 x 10-8 cm) and gamma rays (wavelength, 0.005 x 10-8 to 3 x 10-8 cm) from a suitable source such as X-ray tube. The y-rays given off by radium and radioactive isotopes such as cobalt-60, iridium-192, etc. can be used for inspecting thicker sections than what X-rays can inspect. 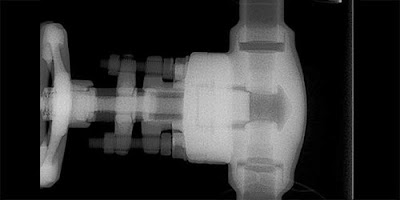 X ray radiography testing involves exposing the weldments to X-rays produced in an X ray tube in which a filament (cathode) provides electrons which proceed towards the target (anode), but these are obstructed by a tungsten dise where they strike; a part of their kinetic energy is converted into energy of radiations which are passed out of the tube as X-rays. When the weldment is exposed to X-rays emitted from the X-ray tube, a cassette containing X-ray film is placed behind (and in contact with) the weldment, perpendicular to the rays. During the exposure, X-rays penetrate through the weld and finally affect the X-ray film. The exposed and developed X-ray film showing light and dark areas is termed Radiograph (or Exograph) and is a negative transparency.

Gamma rays have more penetrating power than X-rays and are used effectively for thicker sections. Further, with gamma rays it is possible to test a number of weldments simultaneously. These rays are not deflected by magnetic fields. Due to easy availability of radio isotopes at cheaper rates. gamma ray testing has now become more economical than X-ray testing.

During testing, X-ray absorption of the test specimen depends on

(iii) most importantly of all, on the atomic nature of the material of the specimen. When X-rays or gamma rays strike the specimen, some of the rays pass through the material (or specimen) and the rest are absorbed by it. The fraction of rays transmitted depends on the nature of material and its thickness. For example, if the object is a steel structure with a weld joint having a void formed by gas inclusion, more radiation will pass through the section containing the void. Because the void results in a reduction of the total thickness of steel structure to be penetrated, a dark spot corresponding to the projected portion of the void will appear on the developed film. Thus radiograph is a shadow picture. Darker regions on film represent the more penetrable parts of the object and lighter regions more opaque.

In X-ray testing of weldments, blow holes or honey combing, cracks and slag inclusion are detected but reading a radiograph is the job of an expert. In general, gas inclusion in the weld joint usually results in blow holes or bubbles. Their radiographic images are round dark spots with sharp corners Slag inclusions are composed of metal oxides. Since the average atomic number of metallic oxides is lower than that of the parent metal (iron), they are, therefore, less opaque to X-rays (than the parent metal) and, therefore, produce dark indications on the radiograph. Cracks and discontinuity in a radiation absorbing material (specimen) may produce a radiographic image in the form of narrow dark lines with irregular trend, i.e intermittent or continuous.